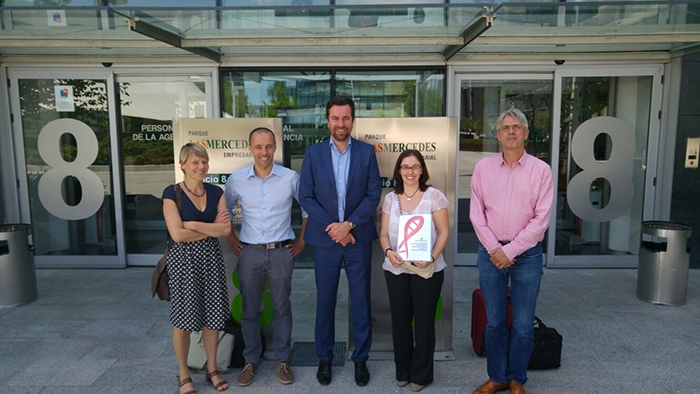 This week was held the 2nd Scientific Advice meeting with AEMPS.  The meeting was arranged in order to ask AEMPS some guidance in order to prepare the coming submission of the phase IIa clinical trial inside the iHIVARNA project. The meeting went through a friendly atmosphere and the results had been very positive.
In the meeting where present: Felipe Garcia, as coordinator of the iHIVARNA project; Rob Gruters as representative of EMC, sponsor of the Phase II trial; Sonja Van Mervienne, CMC expert  and Koen Huygens, QP as representatives of eTheRNA manufacturer of the vaccine;  Marta Rayo and Joel Montane from Asphalion as regulatory affairs experts and organizers of the meeting.
Asphalion participates in iHIVARNA project as a regulatory partner by developing and conducting the following activities:
Achivements:
Currently, the Consortium is preparing the Phase IIa CT.
The four-year 6M€ European project iHIVARNA, funded by the European Commission, aims to successfully immunize antiretroviral-treated HIV-infected patients with 3 injections of the candidate universal HIV-TriMix-mRNA as an mRNA-based therapeutic vaccine with the final aim of improving the efficacy of therapeutic vaccination against HIV infection. The final objective of the project is to generate knowledge for reaching the functional cure of HIV infected patients.
The project brings together the expertise of a number of European groups (Spain, Belgium, and Netherlands) in a number of fields required for an adequate development of the therapeutic vaccine (dendritic cell targeting, rational design of immunogens, mRNA manufacturing and immuno-virological monitoring).
Foto:
From left to right:
iHIVARNA: The research leading to this results has received funding from the European Comunity’s Seventh Framework Programme (FP7/2007-2013) under grant agreement n° 602570 – the iHIVARNA project.
Upcoming new THAI eCTD and Module 1
36th AEFI Symposium